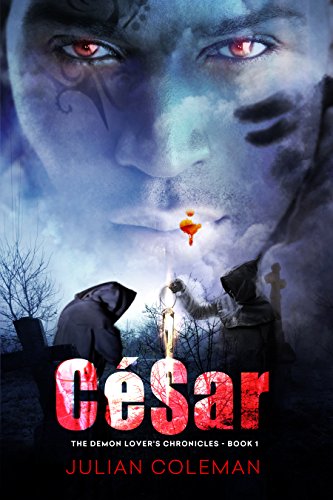 I assume most readers would call Julian Coleman’s Cesar a horror novel, but in reality, it is much more than that. On one level, it’s a story about two sisters, Rachel and Angelina, who are dealing with a family tragedy from a decade ago. On another level, it’s a love story about Angelina and Allen, the young man who wants to marry her. On yet another level, it’s a coming of age story about Angelina trying to discover who she is and who she wants to be. In other words, there are universal themes at work here. But then you throw in the whole vampire thing, and suddenly you have a decidedly different take on all those plot lines.

I’m not usually a fan of horror stories (nothing wrong with them, just not my thing), but Coleman quickly drew me into the world she so expertly crafted, with so many interesting and vibrant characters, people (well, most of them are people) whom I found myself curious about and even caring about. Coleman does an especially good job of portraying Angelina’s ongoing struggle to control the monster that lies simmering just below the surface of her life.

I finished this book in record time, because I just had to know “what happens next.” The award-wining Coleman’s descriptions of people and places are colorful and, at times, even elegant, and her plotting is spot on. If you’re looking for a good horror story, then this is an easy selection. But it’s also an easy pick if you simply want a good read by someone who knows how to grab your attention from the get-go and never let up.

5 of 5 Stars, Review by Robert Germaux

Both my parents were readers. I'm talking stacks-of-books-on-their-nightstands readers. So it's no surprise that an early age, I, too, became an avid reader. Everything from sports books (especially baseball) to Nancy Drew to the Hardy Boys to almost anything about distant and exotic places. And although I've always enjoyed putting words on paper, the writer in me didn't fully emerge until I retired after three decades of teaching high school English. I quickly wrote two books aimed at middle school readers, at which point my wife urged me to try a novel for adults. As is usually the case, Cynthia's idea was a good one. Over the next few years, I wrote several books about Pittsburgh private eye Jeremy Barnes, including "Hard Court" and the recently released "In the Eye." I also wrote "Small Talk" and "One by One," both featuring Pittsburgh police detective Daniel Hayes. Along the way, I took a brief hiatus from the detective genre to write "The Backup Husband," the plot line of which came to me one day when I was playing the What-if game. On that particular day, the question that occurred to me was, What if a woman suddenly realized she might be in love with two wonderful men? I also tried my hand at writing humorous essays, which resulted in "Grammar Sex (and other stuff)" and its sequel, "More Grammar Sex." Coming soon is "Small Bytes," the first Jeremy Barnes novel, to be followed by two other JB mysteries, "Leaving the LAW" and "Speak Softly." In our spare time, Cynthia and I enjoy reading (of course), seeing Broadway plays and musicals, watching reruns of our favorite TV shows, such as "Sports Night" and "The Gilmore Girls," and traveling to some of those distant and exotic places I used to read about as a child. So far, we've been fortunate enough to walk in the sands of Waikiki, swim in the warm waters of the South Pacific and enjoy a romantic dinner in Paris. I love interacting with my readers and getting their input on my stories and characters. Please feel free to contact me at Germaux1@aol.com
View all posts by Robert Germaux →
This entry was posted in Book Reviews and tagged Book Reviews, horror, horror novels, Julian M. Coleman author. Bookmark the permalink.